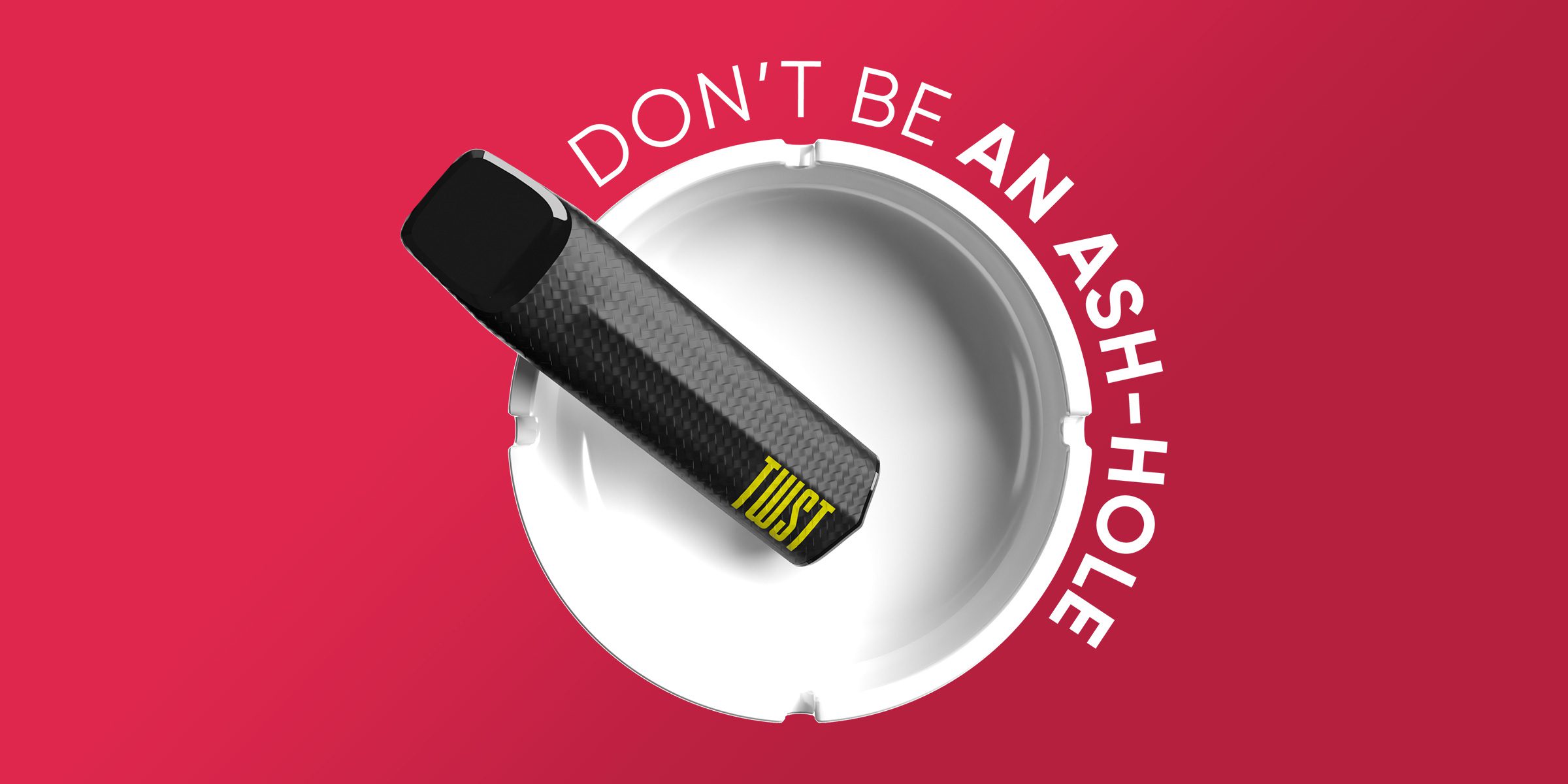 As far as puns go, “Ash-Hole” is fairly easy to understand, and there’s a chance that everyone knows an Ash-Hole or two. HA! But even though you understand the term, do you really know what it means to be an Ash-Hole?

Think of any smoker that you know – imagine them casually enjoying a cigarette while they’re talking in a cloud of smoke – it chokes and fills the air as they shake out ashes all around them. Meanwhile, you’re trying hard not to get ash on yourself or to get burned by the fiery red tip of their cigarette. You always know when they’re nearby, by the trail of discarded cigarette butts all over the floor and streets.

You can also smell them a mile a way. You know that smell. It’s that nice ‘smells like an ashtray’ scent which lingers on their clothes, their hair, and their breath; and you never dare talk too close to them without having fresh mints on hand.

For the most part, anyone who remotely sounds (and smells) like the description above is an Ash-Hole.

So Don’t Be an Ash-Hole!

Am I An Ash-Hole If I Smoke Cigarettes?

Uh, yeah you definitely are. And man…do you really want to be that guy?

Now, don’t take this the wrong way, if you want to smoke a cigarette, you are more than welcome to, BUT you should know what’s on the mind of everyone who hangs around you. You’ve probably had the very same thoughts, but you just haven’t been ready to admit it to yourself. Deep down, you’re starting to realize you’re an Ash-Hole.

You see the way they look at you when you’re smoking, and you notice the way they flinch when you talk a little too close. Then you’re starting to feel like you don’t fit in. It’s making you second guess yourself isn’t it? Did you shower this morning? Trust us, you did, and even that wasn’t enough to wash the Ash-Hole off – you might have to start walking around with an air freshener in your pocket.

The good thing is though, you really don’t need to be that guy! Why be an Ash-Hole when there are way better options? Why be the dude that leaves a trail of cigarette butts behind when you can be the person who looks like they care about themselves and the people around them.

Twist E-Liquids has just the e-liquids and the “ash-less” products to help you make the switch from Ash-Hole to the “guy that everyone likes” and wants to be around! Instead of smelling like burned leaves, you can smell sweet and icy. Now, before you overreact because of all the misinformation that has been floating around about vaping, take a second to read the truth about vaping. Vaping is still a much less harmful alternative to smoking cigarettes, plus there is no trail of ash and you won’t have to carry around a box of mints everywhere you go.

Imagine a life where you get to hug your friends or kids close and tight, a life where people don’t mind being around you or people holding their breath when you walk by or talk. Imagine that life, and hold it close man.

Then again, you could totally ignore all of this and continue to be the guy that walks around with an ashtray in their jacket pocket, or leaves a trail of ash everywhere – what a real Ash-Hole.

Top 5 Ways to Avoid Being an Ash-Hole

By becoming a reformed Ash-Hole, you might even end up quitting smoking or vaping all together. That would be next level!

Red No. 1 (formerly known as Watermelon Madness)
This is a unique e-liquid that delivers an amazing flavor of pure and sweet red watermelons.

Red No. 1 (formerly known as Watermelon Madness)
This is a unique e-liquid that delivers an amazing flavor of pure and sweet red watermelons.