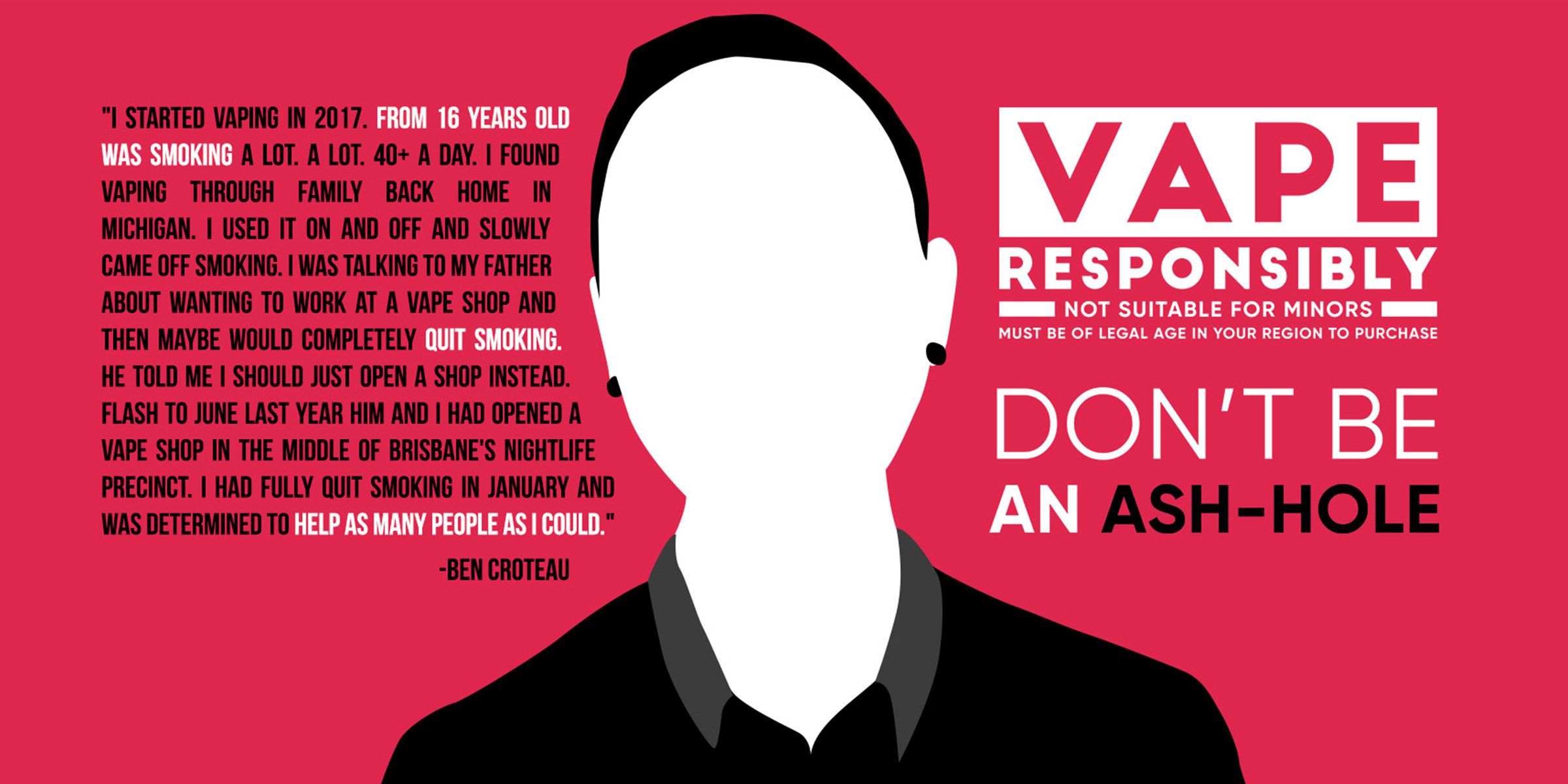 Some of you may already be familiar with the term Ash-hole, and if you’re not then our Don’t Be An Ash-Hole post will bring you up to speed. The goal isn’t to shame people into vaping, but to raise awareness around the truth about vaping and how it has positively impacted some people’s lives. Some people have been able to make lasting change in their lives by having access to different vape flavors, and devices such as TWST To-Go.

As we continue our Don’t Be An Ash-Hole campaign, we want to spotlight real people who used vaping to quit smoking combustible cigarettes and sometimes smoking all together. This week, we took the time to speak with Ben Croteau, who is a reformed Ash-Hole. Ben switched from smoking combustible tobacco to vaping. We thought that his story was one that a lot of current Ash-holes could learn from, and one that most vapers would really understand. Here’s the conversation we had:

Q: At what age did you start smoking cigarettes, and how much did you smoke?

A: I started smoking at the age of 16. I was influenced by work friends and school friends. I started off slow at first, but within a year I was smoking around 40 a day. By the age of 18, I was completely engulfed in the habit.

Q:  How did smoking cigarettes affect your life and those around you?

A: At first smoking didn’t take a real toll on my life. I was cool, and I had more friends because they knew they could get cigarettes from me at parties and nightclubs. I was about 22 when I realised the terrible sleep I was having. I felt unrested and completely fatigued day in and day out. I moved back to my parents’ house in the same year and they would tell me that I coughed all night.

Smoking also partially cost me a relationship of 4 years. I had said I quit in the first year we were together and had continued the lie till the fourth year when it was clear I could not stop. I did everything to cover it up when I was around her and her family careful to not show any sign of smoking. It was a hard job that I paid for in stress.

Q: How did you find vaping?

A: I was basically given a mod by my cousins from back home in Michigan, and told that I would have to ‘figure it out’. Honestly vaping at first was not great. I had no idea where to get juice or coils or glass. I was lost and on my own in it, so I continued smoking and only vaped when I wanted to.

Back in 2018, I found a shop that sold juice and coils, so I started to give vaping another chance. It was getting nicer to vape and smoking was not as appealing. I found myself smoking mostly when I was drinking or out in an environment that was more inclined to embrace me smoking rather than vaping. At the start of 2019 I gave up smoking completely and haven’t looked back.

I had talked to my Dad about smoking and vaping and how much better vaping was. I told him I would like to get a job at a vape shop because fully immersing myself in the environment would help me quit. He and I talked about it a few times and in late 2018, he said, “Why don’t you just open a shop yourself?”.

Flash forward to June 2019 and the two of us had opened a shop in the middle of Brisbane, Australia. We did this right in the middle of the nightlife precinct. Our shop, Super Vape Store Fortitude Valley, is now the most accessible vape shop in Australia, with hours ranging from early morning to late evenings to give customers and new vapers the flexibility to come and get vape gear as well as learn knowledge from us. I got into this because I can see the benefits of vaping and I want to help as many people as I can to feel as good – or better than I do now. I can honestly say vaping saved my life!

Q: What flavor, or flavors, helped you quit smoking?

A: I was a menthol smoker at the end of my smoking habit. I was introduced to Blue Titanic (Blueberry Menthol) by Sticky Fingers which I took to quickly and loved the flavor of. Till this day, it is still a staple in my juice collection and rotation.

Q: How did vaping make you feel as opposed to cigarettes?

A: Vaping has made me feel so much healthier. I have been able to breathe and sleep a lot better. I don’t cough or feel fatigued like I used to. It has really changed my health for the better. I have not been at this great of a point health wise since 15. I am able to eat correctly, exercise more, and have a more stable sleep cycle due to vaping.

Q: When did you quit smoking cigarettes and how has it affected your life now?

A: I quit smoking January 1st 2019 completely. Not smoking has brought more disposable income and time due to not going outside every two hours to smoke. I feel a lot better than I did when I was smoking and believed vaping has saved me from what would have become a lifelong habit of smoking.

Q: Do you have any advice to those that are currently cigarette smokers and want to make the switch?

A: My advice to new vapers and people wanting to look at vaping is to start small, if you want a cigarette you should have one, because it’s a process and it doesn’t happen in a day. Take time to go in to a shop and get advice. Don’t buy something that you don’t feel fits with where you are. Try flavors close to what you crave when you smoke or close to what you smoke.

If you like the flavor stick to it, I did and it worked for me. When we smoke we usually stick to one type of cigarette at a time for years or like my grandfather for decades, so if you find what you like – stick with it. All in all my best advice is to enjoy the journey and the health improvements, take it one day at a time and make the switch that can save your life too.